I’ll admit, before starting this Fibershed project, I thought alpacas were just trendy pets. I’d only ever seen alpaca pairs in small farm fields as I drove past. Perhaps they were a fad, like emu farms. I did know they are useful guards. My uncle lends his alpacas out as protection for lambs. Alpacas help guard goats and chickens as well. 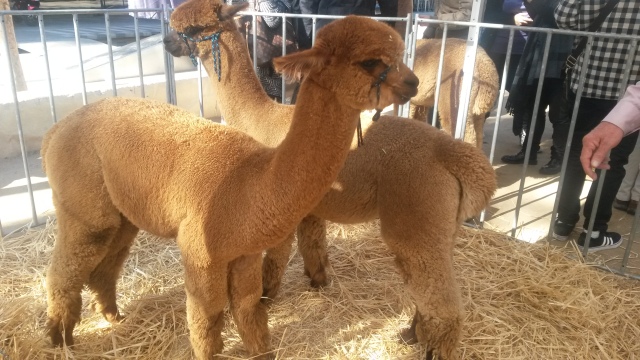 Huacaya alpacas celebrating the 25th Anniversary of the Alpaca industry in Australia, at City Square in Melbourne.

Now that I’ve been to some alpaca farms, I’m much more impressed. Alpacas were first bred by the Andean people in South America up to 6000 years ago. They are part of a family of camelids including llamas.

There are two kinds of alpaca. Huacayas are the cuddly looking kind that we’ve seen most often. The suri looks a little like an afghan hound with its long locks. The Incas prized suri and reserved it for royal clothing only.

Alpacas take a long time to make babies. The average gestation time is 11.5 months! A baby alpaca is called a ‘cria’ and they look as cute as they sound. This is part of the reason alpacas are so expensive: it takes time to get more alpacas! 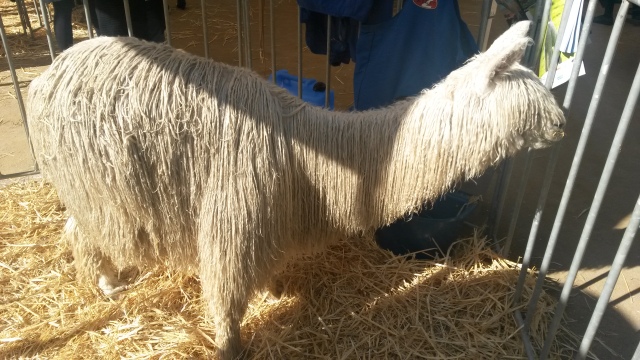 Suri alpaca celebrating the 25th Anniversary of the Alpaca industry in Australia, at City Square in Melbourne.

Alpacas have a lower impact on our environment because they have soft foot pads. They tend to eat a little of everything, allowing plants to regrow between nibbles. They’re free of health problems like foot rot, fly strike and Johnes’ disease. They need one or two annual vaccinations. They do sometimes suffer from vitamin D deficiency. The only place they can absorb the sun is their nose.

Alpacas come in 16 natural colours. They can be black, bay black, white, four kinds of grey, three kinds of brown, three kinds of fawn or combinations of those colours. I know that’s not 16 colours, I’m not sure what the others are 😉 Alpacas need to be shorn once a year, this is usually done before summer.

They are usually shorn lying on a table, and it takes between five to 10 minutes for each alpaca. Depending on the quality of the fleece, you can get between 1.5 and 4kg of fleece per animal.

Alpaca fibre is the same or a little less durable than wool (depending on who you talk to). Each fibre is hollow, which traps air and makes the finished product warm to wear. Alpaca is less elastic, so garments drape well, but may not keep their shape over time. Some people knit at a higher tension to reduce this problem. Its possible to blend alpaca with wool to give more elasticity. Suri fleece twists instead of having an elastic crimp. This is what gives suri the lustrous, slippery qualities that I admire. Alpaca doesn’t pill (yay!), but it does shed. 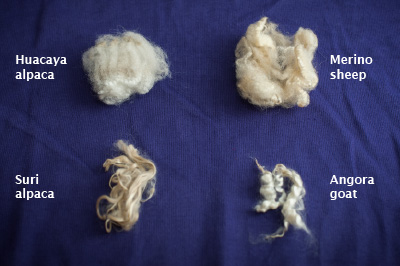 It’s also a soft fibre; suri fleece is even softer than huacaya. The fineness of fibres is measured in microns. One micron is one millionth of a metre. Alpaca can measure as low as 15 microns, which puts it in the same realm as superfine merino. More often, alpaca comes in at 27-28 microns, perfect for fashion fabrics.

Creswick woollen mills make socks, jumpers and scarves with alpaca. Rugs sold here are often produced in New Zealand. Coats and other garments are often produced in Peru. They have more expertise and resources for these products than Australia. Alpaca is also used as a quilt filling. 28-36 micron fibre is used in carpet. Amazingly, there is a carpet maker in Victoria making carpets with alpaca fibre!

Sounds pretty amazing. Why wouldn’t you use alpaca all of the time?

…because no product is the answer to everything! Alpaca is a growing industry. It’s made up of many small farms of varying quality and range of colours. It’s hard to get commercial quantities of fleece in a consistent level of quality. Alpaca is currently a niche product, with an expensive price tag.

Where can I see alpacas locally?

This entry was posted in Fibreshed Melbourne and tagged 1year1outfit, Alpaca, Fibershed. Bookmark the permalink.